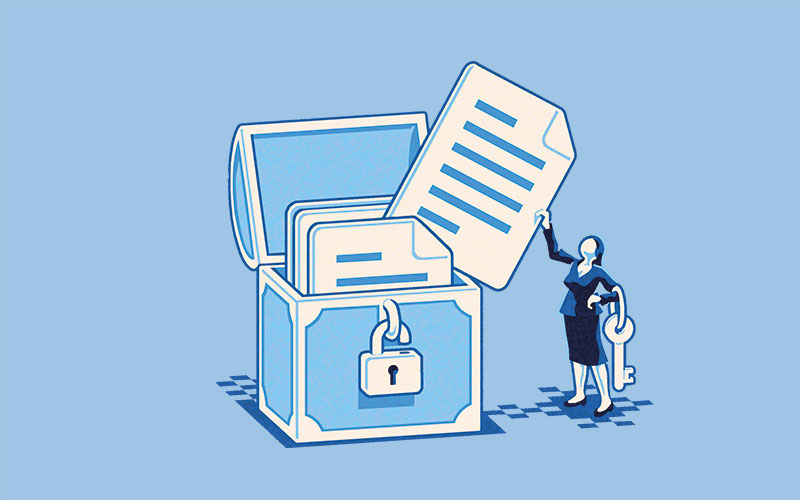 Back in 2019, the Conservative party made a manifesto commitment to maintain the so-called triple-lock state pension arrangements throughout the length of this parliament.

The triple-lock commits the Chancellor to lift payouts to match the highest out of average earnings, inflation or 2.5%.

However, the government has now announced it is suspending the triple lock on pensions for one year from April 2022, with Therese Coffey, work and pensions secretary, saying the state pension will increase by inflation next year to make the system more “fair”.

In April 2021, the Chancellor chose to apply the triple-lock formula, which led to an above-inflation increase of 2.5% in the basic (and new) state pension rate.

However, looking ahead to April 2022, the impact of the furlough scheme last year is likely to leave wages more than 8% higher than last year, adding more than £7bn to the state pension bill every year if fulfilled.

The Treasury will now move to what is know as a ‘double-lock’ for one year only, which would raise pensions by the larger of 2.5% or September’s Consumer Prices Index (CPI) inflation. Various economists expect CPI to be about 3.1%, with average earnings growth of 8.5% for the quarter to July. As The Telegraph reports point out: “Using inflation would add £2.6bn to the pension bill, barely a third of the estimated £7.2bn cost of using this year’s earnings figures.” 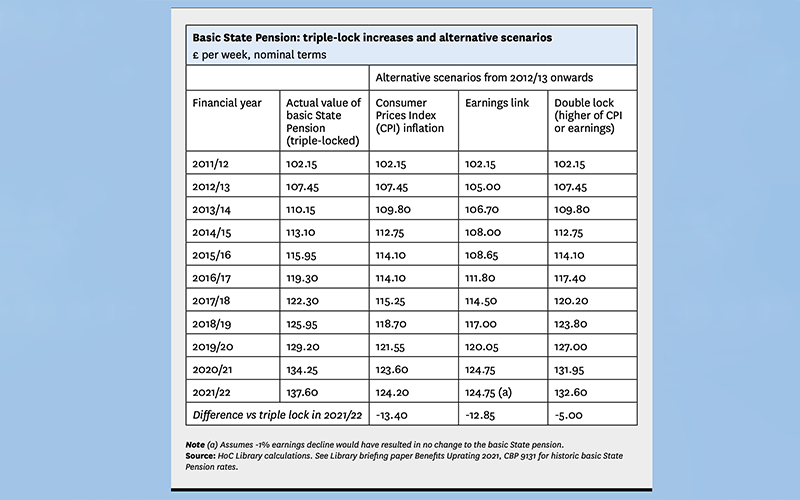 The National Pensioners Commission had joined the debate and fought to maintain the triple-lock to protect existing pensions from falling behind. However, it warned that the country is storing up long-term problems, with or without the triple-lock.

“With a shocking two million retirees judged to be living in poverty and the pension gap between men and women sitting at 40%, the situation is expected to get even worse,” it warns, while calling for a complete overhaul of the system.

Alternative options for the Chancellor included using Office for National Statistics estimates of wage growth, stripping out the effect of the pandemic, or taking an average of earnings over two or three years.

Former pensions minister Sir Steve Webb, a partner at Lane Clark & Peacock, had suggested: “If the Treasury chose to define earnings in terms of the underlying wage growth of 3%, the uprating would ‘only’ cost about £2.5bn, a saving of more than £2bn. Such an adjustment to the earnings measure would be hugely tempting.

“Another alternative,” he says, “would have been to find a way of averaging this year’s earnings jump with last year’s earnings dip and come up with a ‘two-year’ triple-lock approach.”

Meanwhile, the Trades Union Congress had argued: “This time last year, speculation that earnings growth in 2021 could exceed 18% was used to justify calls to pre-emptively suspend the triple-lock, which increases the state pension in line with whichever is highest out of earnings, inflation or 2.5%.

“Ultimately, the government delivered the 2.5% rise due – which worked out at a weekly increase of £4.40 to the new state pension and £3.35 to the basic state pension.

“But now the argument has been made again. We don’t yet have the figures for the relevant May to July period. But even if we do see higher-than-usual earnings growth, the government would be unwise to drop its support for the triple-lock for three reasons.” Those reasons are:

What is the triple-lock and how does it work?

At present, the state pension increases each year in line with the increasing cost of living seen in the CPI measure of inflation, increasing average wages, or 2.5% – whichever is highest.

This is known as the triple-lock. Official forecasts suggest that average earnings will be the highest of these three, by a considerable margin.

What impact has Covid-19 had on the triple-lock?

As people come off furlough and return to full pay, this is recorded as a large rise in average earnings. Job losses have also affected those in low-paid work too.

This leads to a unique situation and one that economists describe as an anomaly.

Predictions by the Bank of England suggest that average earnings could go up by 8%, hence the equivalent increase in the state pension.

This article appeared in our AUTUMN 2021 issue of Personal Finance Professional.
Click here to view this issue
Filed in
News analysis
Also filed in
Pensions