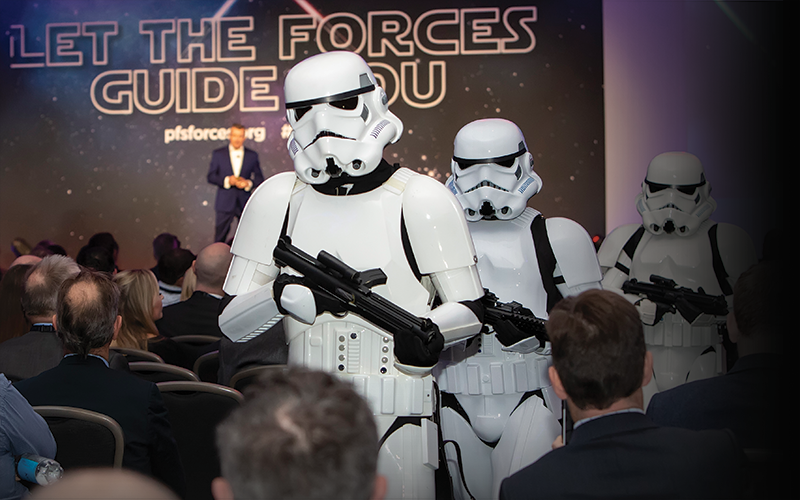 This year’s PFS annual symposiums were based around a Star Wars theme. PFP’s Luke Holloway reports from a galaxy far, far away…

The force was strong with the PFS this year as it held its spectacular annual symposiums in London and Bolton, built around the blockbuster theme of Star Wars.

The packed events – attended by more than 1,400 delegates – took palce at the Intercontinental Hotel in Greenwich and the University of Bolton stadium and led with the message, ‘Let the forces guide you’. A host of firms from across the financial planning industry came together to promote and share their work in raising standards and building a united profession.

Host for day one was British space journalist and broadcaster Sarah Cruddas, who opened proceedings at the London symposium with jaw-dropping insight around data and resource utilisation in space, including asteroid mining and frozen-water collecting. Ms Cruddas revealed that by 2040, space is predicted to be a trillion-dollar economy. “Space is now less a place to visit, more a place to do business,” she said.

PFS CEO Keith Richards then made a huge impression with his entrance to the stage, accompanied by a fleet of stormtroopers to offer a new hope to advisers for 2019. Mr Richards spoke with passion and intent about the progress the profession has made in overcoming significant challenges during the past year.

“More often than not, policymakers and the public are recognising the tremendous progress the personal finance profession continues to make, and since pensions freedoms there is a greater understanding of the key role that financial planning has to play in society, not least because government actually mandated it in legislation,” said Mr Richards. “That is one of the greatest endorsements any profession could ever receive from a serving government.

“What we have achieved in the last six years has been nothing short of miraculous, so well done to every one of you.”

Mr Richards also spoke about the evolution and growth of the PFS, which has seen membership numbers increase year on year to now just below 40,000. He praised members for helping build a more united and inclusive profession.

Paraplanner of the year
Jade Mountford

Mortgage and Protection Advice Specialist of the Year
Maxim Cohen

The events boasted a selection of top speakers including professor Trevor Williams, the former chief economist of Lloyds Bank, who asked what comes next for the UK financial services sector in a post-Brexit world; Michelle Hoskin, internationally recognised author, speaker and leading expert in operational best practice, who spoke about the importance of ‘supercharging’ the client journey; and Abraham Okusanya, of FinalytiQ, whose incredibly energised talk examined the key threats to traditional advice models from technology, the pace of commoditisation of investment management and the behavioural science around how financial planners can survive it.

Strategic and digital solutions expert Abbie Knight, of DISCUS, talked about how technology is shaping the future of advice delivery, while regular PFP author, Rory Percival – whose firm, Rory Percival Training and Consultancy, helps support professionalism in the advisory sector – delved deeper into the vital role of cashflow modelling.

Justin Urquhart Stewart, of Seven Investment Management, who had hosted the second day at the London event, closed the symposiums for 2018, after the final speaker, Helen Sharman OBE, the first British astronaut, took delegates on a marvellous journey into space, describing the training, the launch, living in space and adjusting to life back on Earth.

Recognise you, we will

The PFS symposium in London also included the prestigious Personal Finance Awards. As well as technical competence, the awards focused on improving access to consumer personal finance and broadening diversity and inclusion in the sector.

@7IM_Updates Another great day at the #pfsforces @pfsconf symposium and we are loving the theme! Good to have @ustewart there with us presenting too!

@jonatha04249995 @pfsconf wow. Packed second day. Excellent. Technology will play a bigger role. Bring it on! Human side even more important. Clients and staff at the centre of our business.
I love what we do. Loads more to do.

@Caroline_Stuart Brilliant two days at the @pfsconf #pfsforces symposium. Met heaps of fab people, learnt loads, found out what you need to do to become an astronaut and had a photo with Chewie. Huge thanks to all who made it happen, it was fantastic, big pats on the back to you all

@MontfortIntl The @pfsconf certainly know how to make an entrance! Especially with Keith Richards being led onto the stage by Star Wars stormtroopers. Certainly a first! Let the forces guide you! #pfsforces
#PFS2018 #MontfortOnTheRoad

The Lifetime Achievement Award was won posthumously by the late David Booth, former PR manager at the PFS, who tragically passed away in the summer. Beloved by many across the profession, Mr Booth’s family received his award as guests of honour on the night.

The awards, which rank amongthe most significant accolades in the financial planning sector, were presented by television and radio presenter, and former barrister, Clive Anderson.

Keith Richards, CEO of the PFS, said: “It is important to recognise the outstanding achievements of individuals and firms who are making a positive contribution to the evolution of our profession and the delivery of great client and public interest outcomes.

“There are thousands of unsung heroes in our profession and, in recognising David Booth for his lifetime commitment to our profession, we acknowledge all who work tirelessly behind the scenes to make this sector so great. We have been really impressed by the quality of the entries we received this year, which have raised the bar yet again.

“It was a fantastic night and I am delighted that we can recognise excellence in the profession and personal finance media with these awards.”

This article appeared in our WINTER 2018 issue of Personal Finance Professional.
Click here to view this issue
Filed in:
News analysis