Winning awards is a fantastic accolade and is public recognition of the good work done by those that are honoured. But, as the Chartered Financial Planner of the Year and the winning Chartered firm at this year’s Personal Finance Awards agree, the profession has more to do, particularly in terms of building public trust.

They agree that every time there is bad publicity, it is a case of two steps forward and three steps back. However, neither Chartered Financial Planner of the Year Carla Brown, founder of Oakmere Wealth, or Robert Caplan, founding partner at Chartered Firm of the Year First Wealth, are pessimistic. In fact, far from it.

As Ms Brown acknowledges: “There is a big issue around trust. We hear about the things that are going wrong but nothing about all the good work that planners are doing. There is a huge story around the value that we provide to our clients. It is so worthwhile.”

However, another challenge for Ms Brown is in attracting and retaining young talent.

She was mentored herself and in turn supports three young people in the sector. Ms Brown is also part of the PFS Power panel, which consists of experienced financial planners who help shape the PFS’s Power CPD programme and assist with the creation of inspirational good practice videos, webinars, events, podcasts and articles for the profession.

Dealing with younger clients will need a different approach than that of dealing with their parents or even grandparents, for example, and Ms Brown finds that fascinating.

It has also been one of the reasons why she is enjoying her mentoring role so much – seeing people grow and develop as financial planners.

“There is still a lot of work to be done in encouraging young people into the sector and retaining them, particularly at a time when people expect to change careers several times through their working lives,” she says.

Covid-19 has actually helped, she believes, as it gave people, including herself, time to sit back and reassess their priorities. This period of introspection has benefited both financial planners and their clients, she says.

That applied equally to entering the Personal Finance Awards this year. “It was my fourth time of entering and I was determined to build on my previous success of reaching the finals,” Ms Brown adds.

Winning the award at the fourth time of asking is something she shares with First Wealth.

“We had not considered our first tries a failure,” says Mr Caplan, “but rather an opportunity to do better. We have improved each year and were thrilled to finally receive the prize that we had been seeking.” But that will not be the end of the story, as the company is determined not to rest on its laurels. Like Ms Brown, Mr Caplan believes there is more work to be done.

Co-founder of the firm, Anthony Villas, is a member of the PFS Power panel while financial planners Rob Schwarz and Scott Millar currently host a PFS Power podcast series – evidence of the company constantly striving for improvement. Mr Caplan says a company like First Wealth has plenty to share with other planners, particularly around the challenges of growing the business. “You have a number of brilliant financial planners out there,” he says, “who are putting the client at the centre of what they are doing.

Much of that depends on attracting the right staff, who will be committed to delivering the best outcomes for clients. Mr Caplan says the philosophy at First Wealth is to put the client at the centre of everything but also to properly look after its staff in terms of remuneration, working environment and career development.

The company has also invested heavily in technology, developing its own software to support staff members in doing their jobs. It also runs a Let’s Talk About Money community, through which it is engaging with up to 9,000 people daily, as part of its plan to deliver solid financial planning advice and grow the number of people across the UK who are actively engaged with financial planning.

The key message, concludes Mr Caplan, is that the financial planning sector is a vibrant and interesting arena to work in but also one that delivers good outcomes to its clients, which makes everyone feel good about their work and value to wider society. 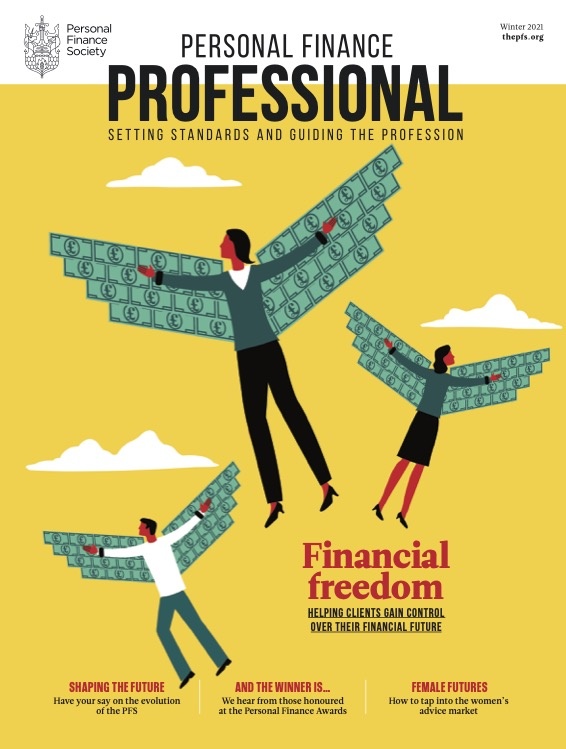 This article appeared in our WINTER 2021 issue of Personal Finance Professional.
Click here to view this issue
Filed in:
Features
Also filed in:
Advice process