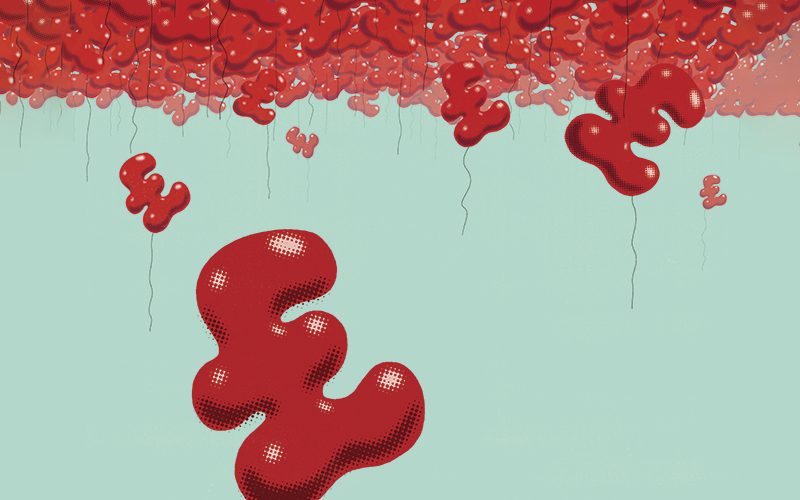 Inflation is always a factor that investors must consider, but the shocks are now coming thick and fast. Decades of globalisation had muted inflation and the last time the Consumer Price Index (CPI) topped 5% was more than a decade ago.

Whether because of increased demand – the unfettering of post-Covid consumer spending – or supply-side constraints such as too few lorry drivers or too little gas storage capacity, inflation is back on the agenda. The Bank of England has increased its inflation forecast to more than 4% by the end of the year, although it says it expects this to be temporary.

It is a hazardous situation. In early October, Kristalina Georgieva, managing director of the International Monetary Fund, wrote that a “more sustained increase in inflation expectations could cause a rapid rise in interest rates and a sharp tightening of financial conditions”.

While this is a global phenomenon, the UK looks especially vulnerable. Its labour market is tightening, with record job vacancy rates. The trade-off between inflation and employment, known as the Phillips Curve, is stronger in less open economies, which has become more of a UK characteristic since Brexit.

If inflation prompts rate rises to any significant degree, corporate bonds – particularly of heavily leveraged companies – will suffer, as will the shares in such companies

What, then, are the investment implications of this, particularly in terms of asset classes?

According to research published by the Bank for International Settlements, Inflation hedging portfolios in different regimes, in periods of volatility, an investor having a pure inflation target should “increase her allocation to inflation-linked bonds, equities, commodities and real estate”. However, in a more stable economic environment, the portfolio should tilt to “nominal bonds and to a lesser extent by commodities and equities”. Which begs the question: just how lucky do you feel about predicting volatility? If you are looking for a real return target of between 1% and 4%, BIS recommends a larger weight to risky assets, mainly equities and commodities.

Let’s take a closer look at the two main asset classes for most investors: equities and bonds. In January, finance professor Jeremy Siegel warned: “Higher inflation is coming, and it will hit bondholders.” This is because inflation reduces the real value of fixed income streams. Investors can respond to this through a combination of cutting bond exposure, shortening duration (the sensitivity of their bond portfolio to interest rate changes) and switching from conventional to inflation-linked bonds.

Equities, on the other hand, should be good inflationary investments as companies can raise prices. Higher prices translate into higher earnings. In addition, inflation helps to erode fixed costs. However, a large inflationary shock means firms are faced with input costs such as materials and wages spiralling out of control, making it harder to pass on increased prices.

Sectors vulnerable to higher inflation include high-growth sectors such as technology, because higher inflation can spur higher rates, which means a lower present value of future cashflows. Likewise, consumer staples – already on razor-thin margins – may see those eaten up by higher input costs. On the other hand, sectors that can pass costs onto customers such as financials and energy should therefore benefit from higher inflation.

There is another vital element to this, rooted more in fundamentals. For example, while the IMF’s Dr Georgieva discussed government debt, she did not touch on corporate debt, which has grown hugely since the global financial crisis. A rapid rise in interest rates would increase the cost of capital for companies. Those companies with anaemic cashflows, those that are heavily leveraged, or both, would face strong headwinds felt by both equity and bond holders.

‘Quality’ has been a focus for some active managers and smart beta strategies, with elements in this mix being low leverage, resilient cashflows and pricing power. If inflation persists, this factor will likely come to the fore. The corollary of this, of course, is that it will also become expensive.

Financial Times columnist Wolfgang Munchau argued last summer that “central bankers do not really understand how inflation works”. He added that “a random number generator, a monkey with a dartboard, or even a horoscope would have outperformed” the European Central Bank’s inflation forecasts. Mr Munchau echoed a 2017 speech by then chair of the Fed, Janet Yellen, where she conceded “that our framework for understanding inflation dynamics could be mis-specified in some fundamental way”. Quite a confession from someone whose main job is to control inflation.

Inflation doesn’t change as all other factors sit quietly on the sidelines. If we compare how fund sectors performed on the two-year upward trajectory of inflation from September 2009, peaking at 5.2% in October 2011 (table 1), Equity UK was the worst performer, returning an annualised 2.6%. Investors would have lost money after inflation on an asset that supposedly does well in an inflationary environment. Meanwhile, not only did inflation-linked bonds perform strongly (an annualised 10.5%), but so did ‘regular’ gilts (6.4%). Similarly, the lower the equity content of mixed investment strategy, the better it did. This, however, was in the context of the post-financial crisis programme of quantitative easing.

There is little certainty on policy response to inflationary pressures. However, if inflation prompts rate rises to any significant degree, corporate bonds – particularly of heavily leveraged companies – will suffer, as will the shares in such companies. Hence why quality as a factor starts to look attractive. Such securities, however, will be as sought after as petrol has been. 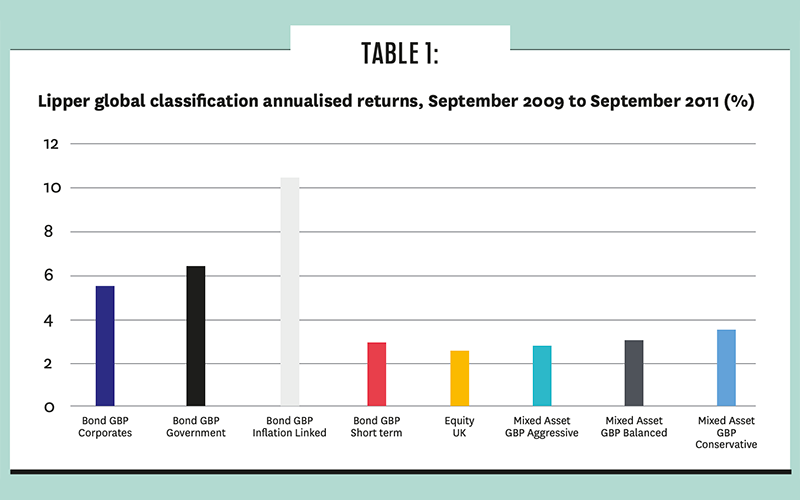 This article appeared in our WINTER 2021 issue of Personal Finance Professional.
Click here to view this issue
Filed in:
Features
Also filed in:
Investments