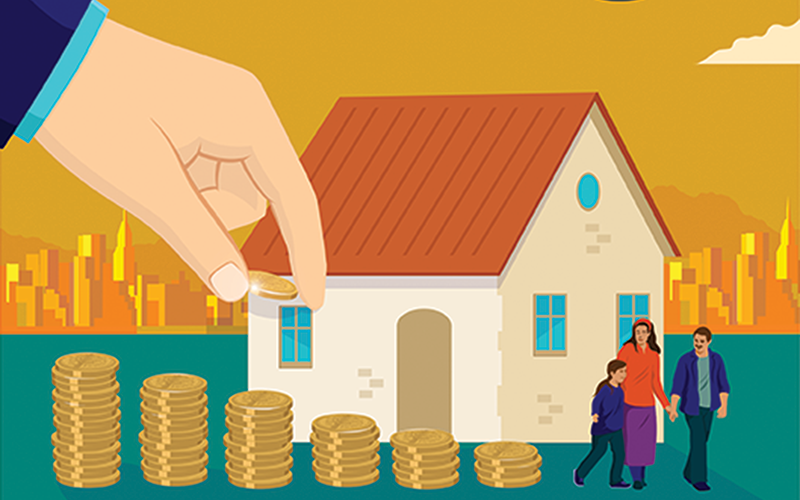 Trustees are responsible for calculating the charge and, where relevant, will need to submit an IHT100 form to HMRC and pay any tax that is due.

Where there is a joint settlor trust, by virtue of Section 44 IHT Act 1984, HMRC will regard this as two settlements, each created by one of the settlors. Therefore, the rules on when a return needs to be made and the tax calculations outlined below need to be applied to each of those trusts separately.

1. How is the tax charge calculated?

The process by which one establishes whether an IHT100 return needs to be made and calculates any tax that is due can be complex, as it involves not only information about the trust in question but also factors in relation to the client’s other actions and gifts, of which the trustees may not be aware. To calculate the tax due, the trustees will require the following information:

The available NRB that is available for the trustees to use is reduced by:

Trustees will be required to notify HMRC of a 10-year anniversary under a trust by completing the IHT100 and IHT100d tax forms (and supplementary forms depending on the nature of asset(s) held within the trust). It is important to note that even when there is no tax liability, the trustees may still need to submit a return to HMRC (see below). The form(s) must be submitted within six months of the end of the month of the 10-year anniversary along with any tax due. If the form is not submitted in time, penalties will apply and (if tax is due) interest will be payable.

In this respect, the NRB is currently £325,000 and is frozen at this level until 2021. When considering whether the value of the trust property is above 80% of the available NRB, the trustees will, again, need to factor in:

It should be noted that any deductions or reliefs that might be available to reduce the amount chargeable to IHT (for example, business relief or outstanding loans) are ignored for the purposes of determining whether a return is required at the anniversary date.

Clearly, as previous distributions need to be factored into the calculation, it is not possible to avoid the need to submit an IHT100 form by simply making a distribution to reduce the value of the trust to less than £260,000.

Where a settlor transfers property to an existing trust that they have established, this can constitute “added property” (Section 67 IHT Act 1984).

Added property will cause a reassessment of the seven-year period applicable to the trust. This will mean that it will be those CLTs made in the seven-year period before property is added to the trust that will be taken into account in calculating trust IHT charges, if that cumulative total exceeds the cumulative total of chargeable lifetime transfers made in the seven years before the trust was established.

This can obviously make a huge difference if the settlor has made other substantial chargeable lifetime transfers after establishing the trust.

Not all property will be added property – only property that is not covered by the annual and/or normal expenditure out of income exemptions.

At a 10-year anniversary that occurs after the addition of added property, the tax calculation gives credit for the fact that the added property has not been held in the trust for the whole 10-year period.

Trustees are responsible for calculating the charge and, where relevant, will need to submit an IHT100 form to HMRC and pay any tax that is due

5. What happens if the deadline is missed?

If the form is not submitted on time, HMRC will apply a penalty. The current penalties are:

If any tax that is due is received late, HMRC will charge interest on the amount due.

The trustees are responsible for ensuring that any tax due is paid. As this is a liability of the trust itself, the trustees should not use their own personal funds to pay the tax.

The issue of the payment of IHT may need careful advance consideration. If the trust is invested in illiquid assets – such as a property – or assets that will trigger a tax liability on encashment, it may be necessary for the trustees to resort to borrowing funds or seeking help from the settlor. The payment of further funds to the trustees by the settlor to enable them to meet an IHT bill can lead to a whole host of other tax implications, not least IHT as the further payment will be a CLT and may be treated as added property, which can affect ongoing periodic and exit charge calculations. Of course, the settlor could make a loan to the trustees to overcome this problem. 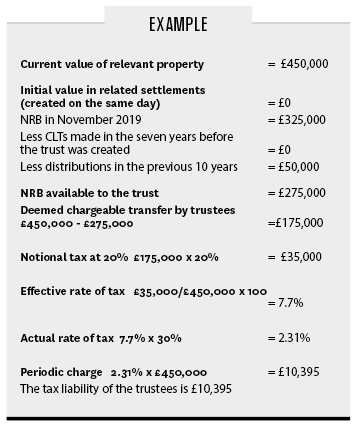 A loan trust would normally be structured as a discretionary trust for maximum flexibility, so the relevant property provisions would potentially apply. However, with a loan trust, there are two points that will help prevent a 10-year charge:

If, at outset and before the trust was established, it was perceived that the 10-year periodic charge rules could present a problem because of the size of the loan, the settlor could consider:

Although periodic and exit charges can arise in respect of discretionary trust-based DGTs, they are given favourable treatment by HMRC in that:

However, if the settlor was given a “rated age” at outset, this will need to be taken into account in determining the value of the discount at the 10-year anniversary. So, if the settlor was 50 when he took out the plan but given a rated age of 54, his age for the purposes of the 10-year valuation will be 64. However, in cases where the settlor is known to be in serious ill health, his interest will then be of little or no value.

Where the settlor is terminally ill, there is still likely to be a discount on the bond value to reflect some degree of delay and a corresponding discount for potential income that would be payable to the settlor, but the precise details would depend on the prognosis and the withdrawal regime. For example, if the expectation was that the settlor had six months to live and withdrawals only took place annually, it is unlikely that the chance of a withdrawal taking place in a year’s time would be taken into account, but if the withdrawals were monthly then it would be reasonable to take six months’ worth of withdrawals into account. That having been said, HMRC would, understandably, not seek to challenge a valuation where the value was not discounted at all in these circumstances.

As mentioned earlier, on joint settlor cases, two trusts will exist for IHT purposes (Section 44 IHT Act 1984). In such cases, special rules apply for apportioning the discount at the 10-year anniversary to each settlement – see www.gov.uk/hmrc-internal-manuals/inheritance-tax-manual/ihtm20654

The valuation of the settlor’s rights at the 10-year anniversary may need to take account of other factors where the case is a joint-settlor case and one of the settlors has died.

First, the fact that one settlor has died will not prevent two settlements continuing to exist for IHT purposes.

Equally, in joint-settlor cases where one settlor has died before a 10-year anniversary, it is thought that the 10-year valuation of the retained rights will be calculated based solely on the survivor’s right to the full continuing withdrawals. So, it will be the rated age of the survivor at outset increased by 10 years that will be used. This sum will be apportioned between each settlement in the proportion in which premiums were paid (normally 50/50). That apportioned value will then be deducted from 50% of the calculated value of the fund to determine the value of the relevant property of each settlement for the purposes of the 10-year charge.

HMRC broadly agrees with this approach but points out that the valuation of the expected withdrawals will need to take into account whether or not the full payments continue until the death of the survivor of both settlors.
So, if the full amount of the withdrawals does not continue to be payable to the survivor, the calculations will need to be adjusted accordingly.

In the run-up to a 10-year anniversary of a relevant property trust, trustees will have much to think about.
It is better for trustees to address these issues a good time before the anniversary and advisers can help trustees to deal with these issues. Failure to plan properly for these liabilities can lead to substantial problems.

For further information on the IHT treatment of trusts, look at John Woolley’s book ‘Financial Planning with Trusts 2019/20’, published by Claritax

This article appeared in our WINTER 2019 issue of Personal Finance Professional.
Click here to view this issue
Also filed in
News analysis